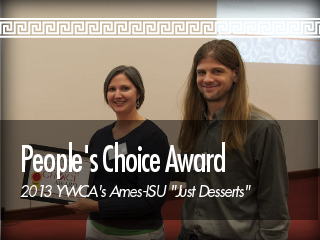 On November 13, 2013–Arcadia Cafe was awarded the “People’s Choice” award at the YWCA Ames-ISU Just Desserts: A Taste of Something Sweet.

Below is the article written by ISU Daily columnist Logan Olson:

YWCA Ames-ISU desserts event supports mentoring programs for girls
By Logan Olson, logan.olson@iowastatedaily.com | Posted: Thursday, November 14, 2013 12:00 am
The YWCA Ames-ISU held “Just Desserts: A Taste of Something Sweet,” to help spread the message of eliminating racism and empowering women on Wednesday.
The event has been going on for 20 years, said Haley Cook, board co-president.
“We started planning for this event last year at this time, but the bulk of the planning has been at the beginning of this past semester,” Cook said.
This fundraiser was $10 for students to attend and $35 for the general public. The money went toward several programs on campus including the Girls Power Mentoring program, the High School Mentoring program, Engaging International Spouses, International friendship fairs and the Giving Tree food drive.
With the YWCA being a campus organization since the 1920s, the club likes to have it at a campus venue in order to have that tie to Iowa State. Last year they had it at Johnny’s in Hilton Coliseum and this year in the Alumni Center.
“We hope to raise awareness with this event, and let people know about the programs that are offered through the YWCA of Ames and hopefully get more people involved, and more members,” said Angela Merrick, executive director and adviser of YWCA Ames-ISU.
Cook said she agrees that the main hope for this event is to raise awareness to empower women and raise awareness for the issue of racism.
“It’s coming together and recognizing that we got a great world out here and a lot of people in it,” Cook said.
The competition portion of this fundraiser was started last year, Merrick said.
“We have seven vendors this year and three judges, with two different awards,” Merrick said.
The vendors included Gateway Hotel and Conference Center, Lincoln Center Hy-Vee, Hilton Garden Inn Catering, Ami’s Cakes and Confections, Arcadia Café, Olde Main Brewing Company and Ames Cupcake Emporium.
The desserts ranged from assorted cupcakes to rum raisin brioche pudding.
The two awards included were the Just Desserts People’s Choice Award, which was voted on by everyone there, and the Just Desserts Better than Dessert Award, which the three judges decided, said Merrick.
One of the three judges was Pam White, dean of the College of Human Sciences and first time judge, said that this was definitely a great event with a great message and that was why she chose to judge this year.
The three judges were handed a score sheet and on a scale from one to five scored the creativity of the product, the taste, the presentation of the dessert and the visual attractiveness of the display.
The winners were announced toward the end of the fundraiser, with Arcadia Café winning the Just Desserts People’s Choice Award.
Liz Jeffrey, co-owner and manager of Arcadia had prepared an Espresso Mousse with a French Macaroon on top.
Jeffery said that the reason they got involved is because they are always looking for community outreach that allows them to get their name out to other people in the community as a new business.
The winner of the Just Desserts Better than Dessert Award was Ami’s Cakes and Confections. Ami Frank, the owner, prepared Gluten-Free Raspberry Schnapps Cake Balls.
“I am really honored to win this award,” Frank said. “I am just a simple home baker who wanted to provide a gluten-free option, so I am just honored to have won the event.”